More and more women are looking to have children later in life, which is why Dr Oz reported that delayed motherhood is now “the new norm.” One in seven children are now born to women over the age of 35. That means the option of egg freezing seems like the perfect solution for many women, but does banking your eggs guarantee you a pregnancy? Investigative reporter Elisabeth Leamy was sent to find out the truth about egg freezing.

On a Thursday night in New York City, 100 single women were having fun after work at an egg freezing party. Parties like that are an opportunity for doctors to give a “crash course in egg freezing.” For younger women who don’t want to have to worry about their “ticking biological clock,” egg freezing has been called a “game changer” and a “fertility insurance policy.” 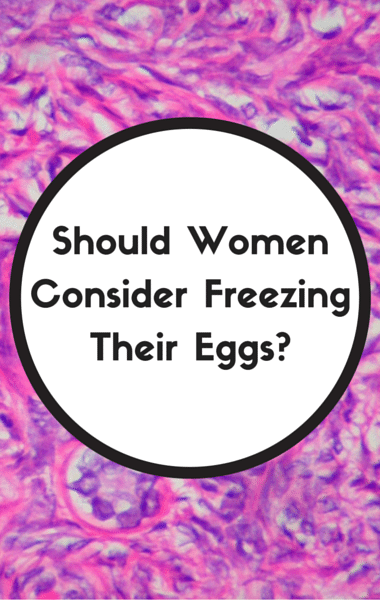 Dr Oz looked into egg freezing to find out whether it’s worth the investment for so many aging women. (euthman / Flickr)

Dr Jamie Grifo at NYU Fertility Center, said his facility used to be primarily full of infertility patients but now about a third of their patients are those electively choosing to preserve their eggs. The truth is that only about one in four of the women who freeze their eggs will actually conceive. The women at the party didn’t actually know those odds, thinking that it was much higher. Because the procedure is still so new, it’s hard to actually know how successful it will be overall.

The other downside is that egg freezing is expensive, costing anywhere from $6,000-15,000 per treatment. So is it really worth the investment?

Dr Oz then sat down with two women who chose to freeze their eggs, one of which was in her early thirties. She said she has friends who are in their late thirties and are having fertility troubles, and they all say if they had known about egg freezing, they would have gone through the process when they were her age. The other woman said the procedure made her feel accomplished and secure, saying she had taken care of a big puzzle piece all on her own, without the need for anyone else.

Dr Oz reported that since 2009, the popularity of egg freezing has increased ten fold. The process is incredibly complex, and there are three main steps. The first step is ovarian stimulation, which means the woman freezing her eggs must inject herself daily with fertility drugs for about 2 weeks to stimulate egg production. Bloating, pain of the injection site, and a little bruising were the reported symptoms.

Step two is egg retrieval, which is where a foot-long needle is used to retrieve your eggs while you’re under anesthesia. Ultrasound is used to see what is going on. The goal is to retrieve 15-20 eggs.

Finally, the third step is egg freezing, which is when an embryologist uses a microscope to identify healthy eggs, and then they’re dropped into tanks filled with liquid nitrogen. It costs about $500 per year to store the eggs and they will stay there until the woman decides to use them.

Dr Oz: Is It Worth It To Freeze Your Eggs

Dr Stephanie Marshall Thompson and Dr Samantha Butts joined Dr Oz, agreeing that the procedure was safe. Dr Marshall Thompson said she would absolutely do it for herself and age 25-35 is the ideal time to think about it. Dr Butts described egg freezing as a procedure with significant promise but it won’t necessarily work for all women. There’s no guarantee, which means you can’t necessarily call it an insurance policy. The good news is that it’s no longer experiemental so she would certainly consider it for herself.

Dr Oz then turned to discuss what is being called an “anonymous epidemic.” Almost seven million women have fertility issues, and it’s important for women to know they’re not alone. Chrissy Teigan just revealed that she and her husband John Legend are having problems conceiving, as well as Brooke Shields and Mark Zuckerberg’s wife. A woman in the audience said it’s hard to talk about infertility because it’s a personal issue.

Dr Thompson said she tells her struggling patients that most people don’t get pregnant within the first month so they shouldn’t feel about it. The reality, according to Dr Oz, is that 5% of people have it easy and are public about it while 95% are struggling with quiet. It’s important to speak up and know there are plenty of options out there. Infertility is a matter of biology so it’s no one’s fault.

Before the end of his show, Dr Oz shared a video of a young girl who was helping her mom and dad make up after a fight. She said she wanted everyone to be settled and be friends. She said “I’m not trying to be mean. I’m trying to do my best in my heart.”