Dr Oz had a hard time giving this introduction, explaining that his next guest was known as the “ugliest woman in the world.” He hated repeating those words that so many internet bullies said to Lizzie Valasquez. Lizzie changed the way many people in the world view her and themselves, after she confronted her bullies with nothing but kindness. Lizzie was born prematurely at 2 pounds 11 ounces and was considered a medical mystery.

Doctors knew something wrong, but didn’t know exactly what. She had a conditon where she simply couldn’t gain weight. She’s now 26-years-old and has never weighed more than 64 pounds. Throughout her childhood, she was bullied because of her appearance. Confidence was instilled in her by her parents and she eventually made friends and achieved academic success. She even joined the schools’ cheerleading squad. 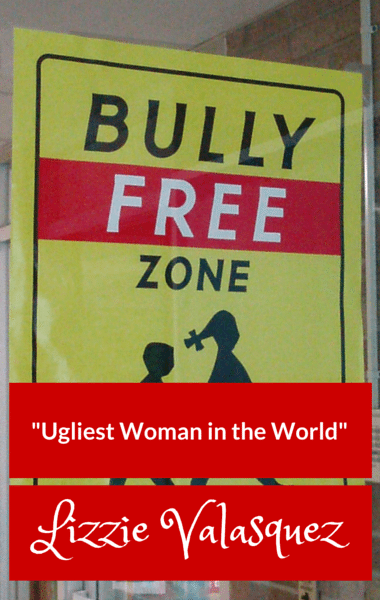 Dr Oz welcomed Lizzie Valasquez, the woman who became an online sensation after being called “the ugliest woman in the world.” (pointshoot / Flickr)

But suddenly, when she was 17-years-old, someone on the internet posted a video of Lizzie o YouTube, calling her the world’s ugliest woman. The video was viewed more than 4 million times. But for her, the worst part was the comments. She fought back by naking her own YouTube videos, sharing her own messages. Her YouTube channel led to her now famous TED Talk.

Dr Oz: Dr Oz welcomed Lizzie to his show, as many were brought to tears, cheering loudly for her as they stood out of their seats. Lizzie said stumbling over the video was an accident, but seeing that video completely changed her life. Lizzie said it was certainly a process to become as confident as she is now. She wanted to take control of the situation and turn it around, determined to not let their words become her truth.

Lizzie said she had the greatest support system in the world, which certainly comes in handy. Lizzie’s mom Rita said she was extremely proud of her daughter and said she’s been amazing. The audience then applauded Rita for being there for her daughter during the hardest of times.

Dr Oz: How To Take On Bullies

Lizzie’s life is now the subject of a documentary called A Brave Heart. Lizzie said she had finished college and was trying to figure out what she wanted to do next. She wanted to share her story as well as everyone else’s story. Jill was in the audience, and she’s a young woman who had been hurt by bullying. She was always a little taller and larger than others, and was teased for her size.

Most recently Jill’s face was Photoshopped onto the body of a whale with the title “JillWhale.” Jill wrote a message on Facebook about inner beauty and even, with the help of a friend, started the hashtag “GoWhaleYourself” as a response to the bullies, but it’s only brought on more backlash from her classmates.

Jill joined Lizzie and Dr Oz, and asked how she could keep fughting the bullies who want to bring her down. Lizzie said she admired her bravery, because she knows what it’s like. Her secret to getting through it was forgiveness, and knowing that people bully other people because they are coming from a place of hurt themselves. You don’t want to give the power to anyone else.

Before the end of his show, Dr Oz introduced an Idaho mom who went to the market wearing just a bikini. She put on a blindfold while she stood behind a sign that said “I’m standing for anyone who has struggled with a self esteem issue like me, because all bodies are valuable. To Support self-acceptance, draw a ‘heart’ on my body.” Some hugged her, some said kind words to her, and many drew hearts on her.