Dr Oz: Behind The Scenes Of Montel Williams’ Show

Dr Oz was thrilled to welcome, for the first time daytime talk show hosts Sally Jessy Raphael, Jerry Springer, and Montel Williams to his set. Dr Oz turned to Montel to find out, if he was still doing his show today, how he would do it differently. Montel claimed he wouldn’t do anything differently. At his show, they were the first to have an after-care program. They had a staff psychiatrist that would literally send people off to rehab centers. He would have kept it the same way because every producer had a card on their desk that reminded them it wasn’t about what happened but why it happened and what the solution is. His show was about raising awareness about real problems and then giving people solutions.

Montel recently came on Dr Oz’s show to talk about stem cells, which caused a lot of chatter afterward. Montel took a moment to say that a very big newspaper wrote an article about how Dr Oz was the only brave enough to call out the industry, and everyone should be applauding him. 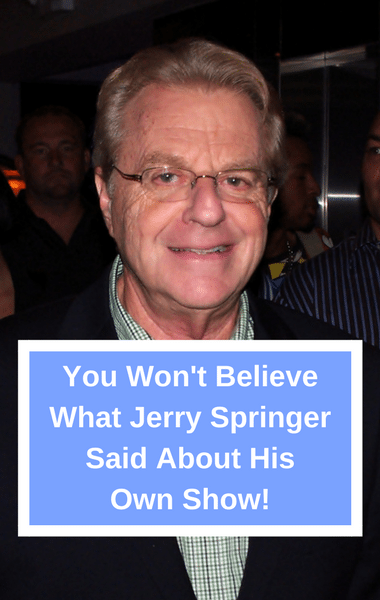 Montel Williams, Sally Jessy Raphael, and Jerry Springer joined Dr Oz to talk about what really happened behind the scenes and in front of the camera on each of their shows. (shankbone / Flickr)

Jerry’s been in the business for 25 years and Dr Oz couldn’t help but wonder what keeps people coming back for me. “Well our show is so crazy,” Jerry responded. “It’s got a niche. I mean, it’s a circus, it really is.”

He claimed that if someone is in the mood for one hour of escapism, they watch his show. He knows people aren’t going to watch his show “because it’s going to save civilization.” He added that he always tell people “may you never be on my show.”

There’s no doubt that Jerry leads the way in terms of most outrageous moments on set. Of course, Dr Oz had to share some video footage of some of the craziest things that have happened on Jerry’s set. Everything from fights over men to mud wrestling prove that Jerry’s show truly is a circus. Even Sally Jessy exclaimed “I didn’t know it was that bad!”

Of course, Jerry had to add a line in there saying “You know the president won’t come on our show because we pull hair.”

However, Jerry did make a point to say that he doesn’t talk politics on his show, despite once being in politics himself. He was once the mayor of Cincinnati, Ohio. So how does someone go from doing something as serious as politics to hosting a crazy show like Jerry’s? “Because I’m still a serious person when it comes to something that’s serious,” Jerry answered.

Dr Oz then wanted to have a little fun and asked Montel and Sally Jessy to guess which show title wasn’t actually the name of one of his shows. It turned out that the two show names that were actually real were:

What do you think about these show hosts and how they’ve entertained audiences for decades? Have you watched any of their shows?