For a quick, easy, and cheap meal, many families turn to frozen pizza. Now that companies are reportedly making their products healthier, Dr Oz sent Mark Schatzker to find out more about popular “healthy” frozen pizzas. Mark took several frozen pizzas to an expert at Eatily, to learn more.

They first looked at a low-calorie pizza and found that it was not only lacking in flavor, but the serving was pretty small. No wonder it was low in calories! As for reduced-sodium pizza, the one tested had the most calories of all the pizzas tested, and tasted “sweet and horrible.” Finally, a pizza made with super healthy ingredients, was labeled as the worst pizza ever tried by the Italian expert at Eatily. Additionally, the crust had four times more refined carbs than it did protein. 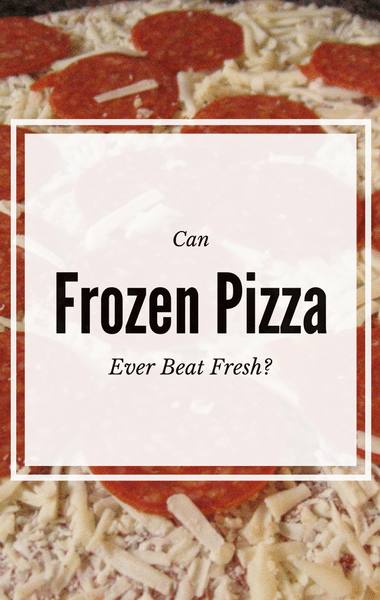 When looking at frozen pizza, there are seemingly healthier options available, but how do they stack up to the real, fresh, right out of the oven pizza? (collinanderson / Flickr)

Essentially, you’re much better off eating the real thing!

Mark then explained to Dr Oz that an essential component to making good pizza is heat. Wood-fired brick ovens can get as hot as 1,000 degrees, which means a pizza can be cooked in just 90 seconds! At around 284 degrees, flavor compounds begin to be produced, which is what makes pizza taste good.

With frozen pizza, it’s frozen, thawed slightly when you bring it home, frozen again, and then cooked in the oven. When it comes to texture and flavor, frozen pizza simply cannot compete. As for the health, the base of a frozen pizza could contain potassium bromate which is a compound illegal in other countries. The sauce is typically loaded with sodium and sugar, and the cheese usually isn’t real mozzarella. Typically a frozen pizza is topped with cheese higher in fat and salt to try to make up for the lack of flavor elsewhere.

Dr Oz’s medical staff working behind the scenes at his show searched all over to find the healthiest frozen pizza. They came upon one with a cauliflower base instead of a dough. It’s 170 calories for three small pieces in the box. But Mark strongly disagreed with the choice, saying it shouldn’t even be called pizza!

You can actually make your own homemade frozen pizza by making homemade sauce and freezing it in an ice cube tray. Then top a healthy crust with real mozzarella cheese and one of the cubes, and after a few minutes in the oven, it’s good to go!

In terms of taste, ease, and crispiness, Mark worked to find the best way to reheat leftover pizza. If you place a paper towel underneath the slice of pizza to remove some of the moisture, you’re left with good flavor and minimal effort, but it’s certainly not crispy. If you set your oven to 450 degrees and place the pizza on a baking sheet, you take care of the crispiness and flavor, but it takes longer.

The best way to reheat a pizza is with a nonstick skillet. Use a lid that’s one size smaller than the pan and trap the pizza underneath. You’ll have the taste, crispiness, and ease you’re looking for!