Dr. Oz discussed the number one surgery that women often do not need, but all too often they get: hysterectomies.  The main reason that women get a hysterectomy is because of fibroids in their uterus.  One woman had 87 tumors removed by laser, after seeking other options since her first doctor told her that her only option was to have her uterus removed in a hysterectomy. 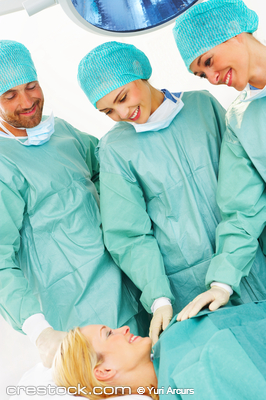 Dr. Jennifer Ashton, author of The Body Scoop for Girls: A Straight-Talk Guide to a Healthy, Beautiful You

Kara, a 36 year old woman, found out she had a fibroid when she was pregnant with her second child.  Now her fibroid is constantly causing her to go to the bathroom because of the pressure the fibroid puts on her bladder.  She is afraid to be too far away from the bathroom.  Her doctor told her that she can either have an Abdominal Myomectomy or a Hysterectomy.  Dr. Ashton said that anyone with a fibroid should think about the following questions:

Questions to Ask Yourself If You Have Fibroids:

Sometimes there really is no option other than to have your uterus removed in a hysterectomy, but Dr. Ashton gave a few examples depending on the answers you have to the above question.

If you are going through menopause, or are around the age when it will begin, then you should try to buy yourself some time rather than having the operation, because when a woman goes through menopause she will have a dramatic reduction in the growth of her fibroids.  Instead of having a hysterectomy, try discussing with your doctor other options to manage the heavy bleeding.

Dr. Oz had a woman on his show who had her uterus removed and she said it was the biggest mistake of her life.  She was depressed for three years and could not stop crying.  All too often, women have hysterectomies because their doctors tell them that they are past the age of having kids so don’t need it anymore… this is a crazy reason!  Dr. Oz said that the word Hysterectomy comes from the word hysteria, because a very long time ago, doctors actually believed that it was the operation to get rid of a woman’s hysteria!

Patients need to understand that their doctors may only be telling them about procedures that they personally can do, rather than all of the options available… this is NOT acceptable!  Another example where you should look at alternative options is if you are in your 30’s and still want to have kids.  Here is a list of options for treating fibroids:

1.  Myomectomy – a laproscope is used to remove the fibroids without removing the uterus.  This can leave a lot of scarring in the abdomen and you may have a lot of bleeding, but you will have your uterus.

2.  Uterine artery embolization (UAE) – a catheder goes into a blood vessel that is removed so that the blood supply to the fibroid is cut-off and thus the fibroid can’t get nutrients to exist or grow.

3. Hysteroscopy – A hysteroscope is useful to deal with fibroids in the uterine lining that cause heavy bleeding.  In a hysteroscopy, a camera is inserted inside of you and goes through the cervix, and the doctor can then shave off the top of the fibroid and decrease your bleeding dramatically.  It is possible that it may grow back and you would have to do it again, but this surely is better than removing your whole uterus.

Questions to Ask Your Doctor About Fibroids & Hysterectomies:

1.  Do I need my cervix removed?  Many abnormal pap smears or cervical cancer are the main reasons you would need to have your cervix removed.  Leaving it in increases the support to the pelvic structure.

2.  A total hysterectomy does not mean you have to have your tubes and ovaries removed.  Ask if the doctor will be removing one or both ovaries.  New data is showing that if you have your ovaries removed for benign reasons, like fibroids, during a hysterectomy, you may have a shorter life because of cardiovascular disease.

3. What should I expect after the operation?  How long will I be in the hospital?  Will there be damage to any adjacent organs?  How will I be in 6 weeks, 6 months and 6 years?

4.  What are my risks?  What is the risk of bleeding?  Should I give blood in case I need a blood transfusion?  How often do the risks happen in general and within your practice?

5.  Ask for a full list of all of your options, even options that your doctor cannot do himself.

relieves cramps and heavy bleeding, and thus can be very helpful in reducing blood loss.

2.  Make yourself herbal teas made of Cramp Bark

(an anti-spasmatic) and Valerian Root

or you can try a tea packet with Valerian Root in it like Tazo Tea Well-Being Herbal Infusion.