Several years ago, Brynne (formerly known as Bryan) decided to have Transgender Surgery. Brynne and her wife, Tina, have 2 children ages 17 and 11. Dr Oz asked how they told the kids about their decision. Brynne stated that she slowly dressed in more feminine clothes and when their oldest daughter had questions, she answered them truthfully. They tried not to hide what was going on. Their 11-year-old daughter always knew Brynne as dressing more feminine anyway, but when she had questions, Brynne answered them truthfully.

Brynne’s told Doctor Oz that her biggest concern was for her daughters. Living in South Carolina, there were a lot of people with negative views. Brynne feared retaliation against her children, Brynna and Krista. 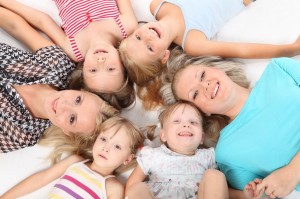 Brynna (17) told Dr Oz that she noticed her dad was dressing differently, wearing short shorts and feminine tops. At first she was embarrassed about her dad for selfish reasons, but she got over it quickly when she saw how happy her dad was. Brynna told some of her close friends about her dad and was surprised to see how supportive they were. Krista(11) told Doctor Oz that she sometimes called Brynne dad and sometimes she called her Mom squared.

Brynne told Dr Oz that in the beginning she felt selfish in making this change, but she knew she had to be happy. Doing this would benefit the family. Brynna, agreed. She noticed a change for the better in Brynne’s attitude.

Louie was a rugged dad who was a mechanic. At age 4, Louie knew there was something wrong. He wanted to wear dresses and play dolls. Later in life, Louie had a son named Cody. With Cody, Louie tried to be the super dad, but he wasn’t happy. Louie made a decision to have transgender surgery to become Jennifer.

Cody, Jennifer’s son, told Dr Oz that he and his dad worked on cars all the time. They had the perfect relationship doing a bunch of “guy things.” Cody wanted to grow up and be just like dad. For 21years, Cody thought he had the perfect father.

For 51 years, Jennifer knew she was trapped in the wrong body. At one point, Jennifer was so confused, she held a gun to her head, ready to pull the trigger. Finally, she decided to begin her journey to become a woman. Cody felt betrayed, feeling “floored and blindsided.” Cody felt his dad had been lying to him for 21 years. Cody felt embarrassed and ashamed and thought Jennifer was being selfish and didn’t care how he felt. In the beginning, Cody felt as though he was losing his dad to “this woman”.

Becoming a woman has cost Jennifer everything. It was lonely and difficult, plus, she lost the great relationship she had with her son. For her, it was almost like a death. Cody hated his dad for doing this and didn’t’ care if he ever saw him again.

Cody hadn’t spoken to Jennifer for 2 years. On stage today, he told her that he was sorry, but he needed to get over Louie and had to deal with his dad being gone forever. It took time to realize that his dad was out of his life, but now he welcomes the new woman known as Jennifer because he understood it made his dad happy.

Jennifer told Cody that she loved him so much and he was everything to her. This was a difficult decision for him because he knew this condition would tear his family (especially Cody) apart. During this difficult time, he tried to inform Cody of the procedures and even had Cody meet some people in a support group, but she felt he never understood the depth of what was to take place.

When asked if he considered Jennifer his mom or dad, Cody responded “I don’t know.” He was still looking for that title. Cody’s advice for kids going through something like this would be to continue to be accepting. Keep your head up and don’t let negative comments bother you. Stay strong.

If you or someone you know is having a hard time coping with being Transgendered, check out the Daily Strength Transgender Support Group.  You can also leave a comment below and share your experiences with one another!