Dr Oz: Joely Fisher On The Death Of Carrie Fisher

While discussing the passing of Carrie Fisher, Dr Oz wanted to hear from her family. After Carrie passed, her sister Joely stated the following: “You all lost Princess Leia and Carrie Fisher; I lost my hero, my mentor, my mirror.”

Joely Fisher joined Dr Oz to talk about her final moments with her sister and her own health revelation. Dr Oz first wanted to know first why she considered Carrie her mirror. Joely explained that the more she thinks about it, the more she realizes that we don’t always like what we see in the mirror. She further explained that it’s a “complex, layered” thing to look at someone and admire them as well as see where their flaws are. “My sister was deliciously flawed,” Joely stated.

She acknowledged that we are all still feeling the loss of Carrie. She told Dr Oz that she believes Carrie was able to make words dance on the page and told her stories with such humor and authenticity. Which is a great thing because it means we can spend time with her anytime we want in the pages of those books. 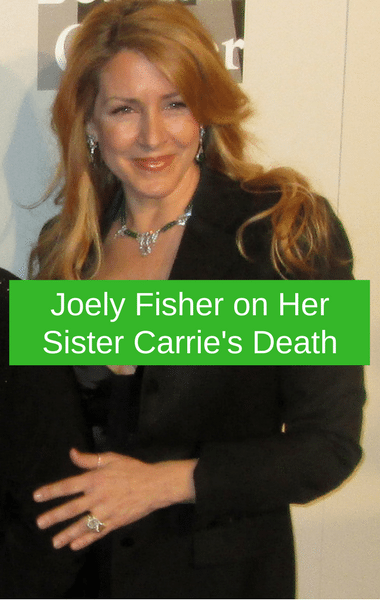 Joely Fisher sat down with Dr Oz to talk about the death of her sister, beloved actress Carrie Fisher. (greginhollywood / Flickr)

Joely also joked that Carrie would be carrying a coke and a cigarette with her at all times and there’s obviously a problem with that.

Joely also acknowledged that instead of 7 stages of grief, she believes it’s more like 77. But Joely is the mother of five people, as well as an actress and a director so like has to go on. But she misses being able to call her sister about anything and everything.

During Carrie’s time in the hospital, Joely was doing a play in Laguna which wasn’t exactly close to UCLA. Because she didn’t have an understudy, she would go to UCLA in between plays. Joely recalled being an Italian Catholic and always going to see people when they died and thinking they looked so small without their spirit in them. She felt like Carrie wasn’t there when she would visit her in the hospital. She thinks she had left already.

Before that, Joely saw Carrie in November for her birthday at a party. Their last last conversation she had with her sister were in text messages the night before Carrie’s last flight. They talked about politics, their mothers, their children, and then promised to see each other at Christmas, which is a promise Joely kept.

The day after Carrie passed, Carrie’s mother Debbie passed. Joely said her family knew that Debbie wouldn’t last long without her daughter and already wasn’t in good health. Although Carrie had darkness in her life, she had an incredible ability to make people smile. Joely also made a point to say that she believes you can easily lose yourself in your own demons and Carrie was determined not to.

Dr Oz: Reaching Out To Joely Fisher On Twitter

Joely has found that people are reaching out to her on Twitter with her username @JMama, saying that Carrie used to give them light and now they’re hoping that Joely can do the same for them. Before the end of the segment, Dr Oz wanted to end things with a wonderful quote by Carrie about how she hoped to go: “drowned in moonlight, strangled by her own bra.”