Dr. Oz talked to celebrity chef and daytime TV host Rachael Ray on his show and she shared some of her biggest tricks to make food healthier. She said that the key is layering flavor in wherever you can. For example, if you cook rice, cook it in vegetable or chicken stock rather than water, so you add lots of flavor without adding calories. 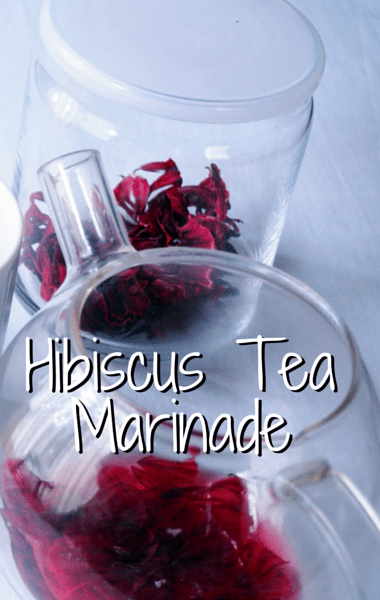 Rachael Ray came by Dr. Oz to show him how to turn hibiscus tea into a great marinade. (cbertel / flickr)

Rachael Ray has also created a tea marinade. This is a great substitute for a brine, because a brine is a lot of salt or a lot of sugar. Instead of taking on those calories and sodium, you can do this instead.

If you use Hibiscus Tea with a lot of lime wedges in the place of a brine on a lean protein like chicken or pork tenderloin, you’ll have an enormous amount of flavor. You could also add some Fresno Chili Peppers, garlic, and just a pinch of salt for some extra flavor.

Rachael Ray said if you’re trying to cut out salt, replace it with lime juice. If you want more flavor without adding calories, add citrus zest. She recommended making your favorite mashed potato recipe with sweet potatoes instead of regular potatoes. Also, instead of using butter and sour cream, use chicken stock, zest, and salt and pepper and your favorite dry spices. Rachael said she also likes adding all-fruit orange marmalade, but that seemed a little out there to me.

Citrus zest only has 2 calories in it, so it’s a win-win.

If you want to replace fat in your dishes, the key is acidity. Rachael Ray suggested using a vinaigrette on veggies instead of butter. This adds tons of flavor while saving the categories.

She said choosing your vinegar depends on your own palate. She also said when you open vinegar bottles, you should keep them in your fridge, not your pantry. In the pantry, they get cloudy and lose their punch.

“Yeah, you should keep your vinegar in your fridge, pumpkin,” Rachael said.

Rachael Ray shared her “secret sauce,” which is something you can put on everything from goat cheese to fish to chicken. It’s Chimichurri.

All it takes is adding parsley, mint, fresno chilies, shallots, garlic, lemon, sherry vinegar, honey, olive oil, salt, and pepper, and adding this mixture to a food processor. Grind it up and put it on whatever you like, from grilled vegetables to pita to grilled meats and fish.